Sense of touch
Your sense of touch, or tactile sense, is made up of a very fine network of
receptors in your skin, forming your body’s largest sensory system. Because
there are so many sensory nerves, you can feel the lightest touch. The skin is
your body’s shield, and touch makes you aware of your boundaries. Your
sense of touch only gives you the experience of being touched by a ‘thing’.
In order to know what is touching you, the observation needs to be
expanded with your other senses: by looking at what’s touching you, feeling
its structure or its temperature.
The sense of touch is formed by a large number of tactile organs situated just under the surface of the skin between the epidermis and the dermis (figure 1). The tactile organs are simple receptors connected by nerve axons. The receptors sense pressure on the skin and that is how you can feel touch.
There are tactile organs all over the body. The distance between the receptors determines sensitivity, which differs for different parts of your body. Fingers, tongue, lips, nose, and forehead are very sensitive to touch, meaning that these parts have a higher density of tactile organs. Not surprisingly, perhaps, these are all important parts of the body for feeling or touching. Other areas, such as the back or the soles of the feet, have a lower density of tactile receptors and are less sensitive to touch. Observing with twelve senses
It is necessary to use your other senses, such as movement or sense of temperature if you want to know more than simply the fact that something touched you. You can use your sense of movement to explore the object with your hands, to find out its shape, its external structure, and so on. Yet it is still difficult to determine what it might be. Your sight will give you the most information. Your tactile sense delineates your body. It indicates where you end and something else begins.                                                                                    Without the sense of touch, you would not feel this boundary, and you would not know where you stop being. You would literally be boundless and flow into the other. Without a sense of touch, you would have no physical self-awareness.

Exercises
This is an exercise for two people to discover the density of tactile organs on different parts of your body. Take two pins and hold them at a fixed distance from each other. Then press them softly onto a part of the subject’s body (e.g. underarm, hand, finger, fingertip, back, shin). Does the subject feel one or two pricks? Reduce the distance between the pins until two pin-pricks are felt like
one. Repeat this on other parts of the body, such as a fingertip, palm, back of the hand, or leg. Close your eyes and ask someone to give you an object at room temperature. When you first receive it, do not move your hands, try to feel what it is only by using your sense of touch. Then start feeling
it with your hands, describe the object, and try to experience what it is.
One person is blindfolded. Someone she knows stands in front of her, and she must find out who it is by feeling the person’s face.
Ask someone to blindfold you and try to solve a wooden puzzle using only your sense of touch. This exercise demonstrates that touching results in a different perception of sight. Take two trees of different species and examine them visually. Then go to each tree and touch the trunk. Describe the
difference. You could also do this exercise with other objects instead of trees. 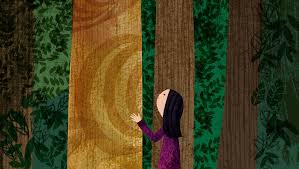