You smell things with your nose. Each time you breathe in, new scent
particles brush past the nasal mucosa deep inside your nose. The nasal
mucosa is connected directly with your brain by a short nerve so that you
perceive scents almost immediately. It is so fast that you can be taken by
surprise when you suddenly smell something. You cannot block out scents
without holding your breath, which you can never do for long. When you
have been exposed to a scent for a while, you stop noticing it, nor will you
notice a gradual strengthening of the scent. You only notice it if you go
away from it for a while and then come back to it. In that case, you will probably be amazed that you did not notice it before.
This can be illustrated by the following example. Once, my team and I had to clean the small intestines of a cow. In this procedure, the intestinal contents are slowly pushed out of the intestines. Even as the volume of drained intestinal content — and thus the smell — increased, we were hardly aware of the stench in which we were working. At some point we went for a tea break and only then, in the clean air did we notice the awful smell on our hands and clothing. When we went back to work, the stench was almost unbearable, but after a few minutes, we were again oblivious to it. It is possible for a strong smell to cause nausea. In that case, you remain focused on the smell and continue to perceive it.
Since you have to keep breathing, you cannot help but perceive scents. There is no way to block them out. You perceive scent immediately and classify it as distasteful or tasteful, pleasant or unpleasant, vile or attractive. Scent strongly influences your judgment. Your experience tells you that bad things or things that you dislike always smell. Volcanoes, rotting food and toxic substances all
have a foul smell. Natural substances that are good for you are not perceived as smelling bad.
In this way, your sense of smell forms one of the foundations of your moral judgment. Your sense of smell thus helps you to distinguish between good and evil. People can distinguish about 2000 scents, from roses and camomile to the smell of horses, goats, and cows; from milk, wine, cola, and beer to wood, cement, asphalt, and stone, and so on.
You recognize the scent of a fresh spring day or a scorching summer afternoon. You can distinguish the particular smell of a Tuscan village, a peat bog, a book-lined study, or a sick-bay. You can also smell someone’s mood:
someone who is afraid emanates different scent particles than someone who is at ease.
You respond to all these smells, usually without being conscious of it.
Observations of smell differ from other observations of, for example, taste and sound because scents are difficult to categorize and describe. Scents are often described by association: the smell of roses, blueberries, of fresh fruit, of grease. Or people might say: this reminds me of a head of lettuce, or of an
old shoe, or of grandma’s house. Smells can be described by using other observations which are associated with the smell. It is possible to determine the chemical composition of scent, and in many cases, it can be synthesized. Many of our perfumes and artificial scents (often called flavorings) are made
chemically.
Smells can bring back memories suddenly and strongly. You might be walking along a street when a familiar smell suddenly takes you right back to the past, and to the occasion that you smelt it before. For a moment, you are submerged by memories. This often happens without being consciously aware of
having perceived the smell. Scents and smells can affect you more strongly in this way than observations made with other senses. Our sense of smell is quite primitive compared to that of animals. A dog’s sense of smell is a million times
more sensitive than ours. A dog has no trouble smelling the fear of a passer-by and responds directly.
Because of the short reaction time, instinct is closely connected to the sense of smell. An animal’s behavior is thus determined to a large degree by what it smells. If your sense of smell was as good as an animal’s, you would constantly be making strong judgments and be incapable of more objective
observation. Your sensitivity to scents would leave no scope for a personal response, and your thoughts would be more instinctive. As a result, you would be at the mercy of what your sense of smell told you.

Exercises
Select some food and drinks, and describe their scent. When you have finished, take a short break, then smell them again and record any judgments they provoked. Did they arouse any memories? If so, describe them.
Go to a place in the woods, or in a barn or field, and describe what you smell. Which smells do you notice straight away, and which do you only become aware of after some time? What sort of judgments do you make?
Smell the different types of animal feed in a barn. Describe the smells and also describe your first impression of them (tasty, disgusting, etc.). You can do this exercise with other objects, too, such as plants, animals, foods, textiles, detergents, and so on. 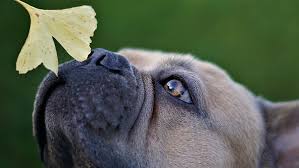