Your eyes are your most important sensory organ. They are the only organs
located visibly on your body’s surface. “Seeing” is often used synonymously
for “observing” or “understanding”. Yet in actual fact, your eyes only see
colours and light and dark. You can see shapes, motion and proportions
because your eyes move and work together with the senses of movement
and balance. It is easier to block visual stimuli than smells or tastes. There is a distance between you and what you see and thus you observe more consciously. Of all your senses, sight contributes most to your awareness. You are an organism with conscious thought, which is intricately involved with the act of seeing. This also means that it is easier to be mistaken about
what you see than what you smell, for example. Sometimes, your thoughts determine what you see. You can experience this in two of the exercises, below. The sense of sight is the most popular sense for scientific observation. Everything is expressed visually, often in numbers, because the eyes are supposed more reliable than other, ‘more primitive’ senses such as
smell and taste. The eyes are considered to be objective.
The eye is a transparent oval ball into which light enters. Light rays first pass through the cornea and then through the pupil. The pupil detracts and expands, depending on how little or how much light there is. The pupil is located in the centre of the iris. After passing through the pupil, the light is
concentrated by the lens, it passes through the eyeball and falls onto the retina. The retina has conical and rod-shaped receptors. The eyeball is made up of a transparent, colourless, jellylike substance containing 99% water. The tissue of the cornea has a somewhat crystalloid structure. The rod-shaped photo-receptors on the retina (pars optical) can sense light and dark, while the conical-shaped receptors (pars caeca) are sensitive to colours.
The pars optical adapt very well to changes in the degree of light, as you will have experienced on entering a darkened room. First, you see nothing, but after a while, you can see quite a lot and find your way around. You cannot see the colours in the dark. The yellow spot is the most sensitive part of the retina
and is made up solely of pars caeca. The place where the bundled optical nerve leaves the eye is called the blind spot, as the eye has no receptors to register anything here.

Most people can see about 150 colours, though some can see more. We can perceive the subtlest differences in the colour green. Colours can affect your mood. Red makes people active. It is perceived as being lively and restless and boosts strength and energy. Orange makes people enthusiastic, while yellow
radiates and gives a sense of cheer. Green is restful and balanced. Blue is a cool colour and stimulates thought. White is the reflection of the spirit; it gives us a sense of purity and symbolises chastity. Black, on the other hand, evokes human sorrow. Goethe discovered that colours are a result of the play between light and dark. You see red, orange and yellow when you look out of the dark at something light, the sunset for instance. Blue and violet
predominate when you look from the light at something dark. That is why the sky is blue: it is light here on earth, but black in space.
Goethe put it this way: light’s victory over darkness results in active colours (red, orange and yellow), while the victory of darkness over light brings out passive colours (blue, indigo and violet). You can verify this by looking at a rainbow. The sky is always darker at the top of the rainbow than at the bottom, and the red is always on the top where it is darker, and the violet on the bottom, where it is lighter. You can find evidence for this rule in brown eyes, where the iris is red nearest the pupil and green or bluish nearest the
white of the eye.
Colours are arranged on a colour wheel in a succession of red, orange, yellow, green, blue, indigo, violet, then back to red and so on. Only colour can be arranged in this type of wheel, it does not work with other observations.
When you stare at a colour intensely for a while and then look away, you will see an after-image, an image whose colour is the opposite, or the complement (on the colour wheel), of the original. For example, if you stare at a violet-red object for a minute, you will see an after-image made up of green
and blue since green complements violet and blue complements red. During prolonged exposure to a bright colour, the conical receptors on the retina that perceive the colour become desensitised. The negative after-image occurs during the recovery of the desensitised retina. The colour of the after-image is
not a physical, material colour; rather, it has a lingering, unearthly and transparent quality. You could describe it as an etheric colour.
The effect of colours on mood has been demonstrated effectively in scientific experiments such as the following. The subjects in this experiment did not know what the purpose of the experiment was. One half of the group was told to paint a certain picture with red paint, while the other half was told to paint the same picture with blue paint. After fifteen minutes of painting, the group using red paint was louder and more restless than the group using blue paint. This experiment showed how mood was affected by these colours.
Another experiment was carried out in a factory. One room in the factory was painted in the usual colours and the other in soft, human tones. Before long, workers in the second room had achieved a 15% higher production rate and taken 30% less sick leave than those in the first room.

Exercises
Observe the two objects below. What do you see? What else can you see? Can you change your focus from one observation to the other? Then what do you experience?
Place a coloured sheet on top of a white piece of paper. Stare at the coloured sheet for a minute, then remove it and continue staring at the white paper. What colour do you see now? What qualities would you ascribe to this colour, compared to the coloured sheet? Do this exercise for each of the colours of the rainbow and find their complementary colours or opposites.
Painting exercise: paint something in one colour. After half an hour, see what sort of mood you are in. It is better to do this exercise with a partner: let one person do the painting while the other observes the painter.
Hold a hand in front of your left eye, and look at the dot below with your right eye. Move the book gradually closer and farther away from your face. At most distances, you will see the star to the right of the dot, except for one particular distance when the image of the star falls onto your blind spot.
Take a simple natural, living object such as a leaf. Make a larger-than-life drawing of it. Try to recreate the different shades of colour as accurately as possible by mixing your paints. Painting requires you to look with increasing accuracy and thus improves your ability to observe visually. This
exercise also demonstrates that the colours you see are composite colours. 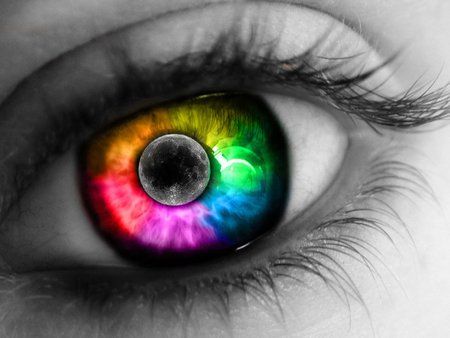