The last sense is the sense of ego with which you observe the other’s
personality or individuality. This sense needs to be activated, because in
practice — with people tending to be distracted by their own and others’
habits and emotions — the sense of ego is barely used.
Steiner described the observation of someone’s personality as follows. You
spend some time observing the other so that you have an impression of
him. This impression imposes on your inner being, a feeling that resembles
an assault. Your response is to retaliate, and you throw the other out of your
inner being. This causes your aggression to diminish so that you can allow the other in again. Attraction and repellence, sympathy, and antipathy alternate.
What this means, is that if you want to get to know someone’s personality, you must allow him into your inner being. But you can only tolerate this intrusion for a little while. Before long you need to have your inner being to yourself again, and so you throw the other out. This process can be repeated.
The ego-sense is used in various ways: You can observe someone’s individuality most directly in their eyes. The eyes give you an unfettered view
of the other’s ego. Unless you are in love with that person, you can only do this for a short while before you start feeling uncomfortable. When you look into someone’s eyes and encounter them, something gets sent back to you. There is resistance as you have entered the other’s private space. You cannot look into both of someone’s eyes with your own two eyes, you have to look with alternate eyes. Generally, you will have a preference for one eye, as the other makes you feel uncertain. You will probably experience little trouble in looking children (up to about twelve years of age) in the eyes for a longer period of time, as their return gaze is a soft one. The same applies to the return gaze of animals. The difference between humans and animals can also be experienced in this way.
The handshake is also an expression of someone’s personality and enables the mutual observation of each other’s egos. As with eye contact, you observe the other intensely when you shake their hand. This intensity occurs in the encounter of two individuals. In both cases, you can hold out for a while, but then you either need to draw away or vary the contact by alternating between focusing and retreating. You also observe someone’s personality by their posture and body movements. You can observe how the forces of personality shape the body and how the body is used. By absorbing someone’s posture and movements you perceive how the other’s ego functions in their body. Important physical aspects to note are the other’s balance (are they standing straight or not), the way the other stands on the ground (are they stand on the surface, are they hovering above it or are they too deeply rooted, and the way the other walks. When you listen to someone, you also observe something of the individual. You can tell whether someone is telling something that comes from within, or whether they are relating something that has not been
internalized. The individual line of thought also reveals the other’s personality, especially if you follow that line of thought from a distance, with a positive critical attitude. You observe these thoughts with your sense of thought; the individual aspect of the thoughts are perceived by the sense of ego.
The meaning conveyed by spoken words depends on who is talking. Two people can say the same words but mean different things. If two good friends of yours both say “I’ll do it,” then in one case you’ll interpret it as “he will try to get around to it” and in the other case, you will be able to depend on her to
do it. Thus you use observations of the individual to interpret what they say. In the same vein, you can observe the other’s personality in their voice.
The ego-sense functions similarly to the sense of touch: you touch the other and let the other touch you, you absorb the other. That is why you feel uneasy when eye contact or a handshake lasts too long, or if you are absorbed in the other’s thoughts for too long. Your sense of ego uses your whole body and not
just the outside, like the sense of touch. If you do not allow the other to enter your inner being, you will not observe their individuality. It is essential to take a back seat for a while in order to make the observation of the other’s ego possible. The individual can also be observed in animals, plants, events, and situations. Obviously, the individual cannot be observed as directly as with people, but it is a skill that you can learn.

Exercises
Form pairs and take turns looking into each other’s eyes. Describe what you observe and what you experience. Ask a third person to observe the movements of both pairs of eyes, and to describe his own observations.
Form pairs and shake each other by the hand. Describe what you observe and what you experience.
Study the posture of a number of people. Describe it, and try to draw careful conclusions about your observations. Use the observations in the text.
Try to remember situations in which you observed someone’s personality by their thoughts, i.e. how they related a story, or by the connotative meaning of what they say. 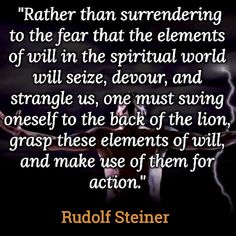