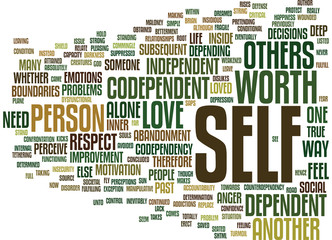 A statement of control and conformity of the early behavior modification that creates codependency tendencies in Americans, “If you cannot say anything nice, do not say anything at all”. This statement among many sets the stage for children not to questions, expanding or confront lies or misinformation, they are afraid to be caught as not nice, being mean and even bullying. The other big issue with such core training in early development is that no one knows what being nice is and what not being nice is, only the person controls the construct of the reality of the child does and it is made up of their own behavior modification done to them.  ~ Bridgette

Codependency is a behavioral condition in a relationship where one person enables another person’s addiction, poor mental health, immaturity, irresponsibility, or under-achievement. Among the core characteristics of codependency is an excessive reliance on other people for approval and a sense of identity.

The following is a list of symptoms of codependency and being in a codependent relationship. You don’t need to have them all to qualify as codependent.

Karma by Rudolph Stiener Volume 1 there are 8 total (here is the first one pdf) https://wn.rsarchive.org/Lectures/GA173/English/RSP1988/KarUn1_index.html

(here is the link to buy book one) https://www.amazon.com/Karma-Untruthfulness-Rudolf-Steiner/dp/185584186X For more information or for a private in person or online session contact Bridgette Lyn Dolgoff  @ consciousnessofeconomics@gmail.com ~ Skype: Bridgneit ~ https://www.facebook.com/bridgette.lyn.dolgoff